The name Aaron has Hebrew roots and is often thought to have the meaning of high mountain or mountain of strength. In the original Hebrew pronunciation, the name is actually pronounced "Aharon" but the "h" was later dropped by the Greek language which is where the English form of Aaron was deprived from. Aaron was a name that was used by many Jews and early Christians but in the Middle Ages, it was solely thought to be a Jewish name. In the bible, Aaron is the brother of Moses and although it is uncertain where the biblical name originated, it is believed that there is an Ancient Egyptian origin which means warrior lion.

Aaron was ranked 60 in 2018 list of US boys name and dropped by 30.43% from its previous ranking of 46 in 2017. Aaron was ranked 934 in 2018 US female names list and elevated by 1.37% from its previous ranking of 947 in 2017. Comes from the Hebrew "Aharon" Means: "the one who comes after" If Day on July 1st.. The robust nature and strong personality,Aarondo not go unnoticed. Aaron are men "whole", passionate about their work. Energetic, nervous, possessive,Aaronare also authoritarian. Reserved, independent, quite cold at first, but as soon as the ice is broken,Aaronare pleasant ones. Aaron are simple, sincere and loyal.

Aaron is a very very popular first name for a boy in England & Wales which is popular since 1996 and ranked 80 in 2014. Around 31105 people wear Aaron as their first name. Aaron is a very consistent name over the past 18 years.

Expression number of Aaron is 22.

Aaron are persistent and possess leadership abilities. Aaron dream big and so are their achievements in real world. Aaron can transform any idea into reality which make them a master builder equipped with ingenuity and innovation.

Names that rhyme with Aaron Aahron, Aarron, Abron, Acheron, Adron, Aeron, Agron, Aharon, Ahron, Airon, Airron, Aleron, Amaron, Amron, Andron, Antron, Aron, Arron, AtheronFamous people named Aaron
Elena Aaron in By the Sea as Actress
Betsy Aaron in Episode #1.1 as
Piper Davida Aaron in Party Hard: Part I as Actress
Shaaron Claridge in Suspended as Actress
Kelly Aaron in Episode #17.1 as Actress
Bonnie Aarons in Silver Linings Playbook as Actress
Marla Aaron Wapner in Chapter 36 as Miscellaneous Crew
Caroline Aaron in Edward Scissorhands as Actress
Aaron Aguilera is a Mexican-American professional wrestler and an actor, better known as Jesus and Onein the WWE.
Aaron Aaronsohn was a jewish scientist, agronomist, botanist, explorer, businessman and politician
Aaron Allston was an American game designer and author of many science fiction books.
Aaron Betsky is an architect and art critic.
Aaron Burckhard is a drummer who played for Nirvana in 1987
Aaron Staton is an American actor known for his role as Ken Cosgrove in the series Mad Men
Aaron McCusker is an Irish actor known for playing the role of Jamie Maguire television series Shameless
Aaron Donald is an American professional football player in the NFL and plays in the team St. Louis Rams at the position of Defensive tackle with the number 99.
Aaron Carpenter is a Canadian rugby player who plays hooker, erp can also be flanker or No. 8.
Aaron Eckhart acted in movie Thank You for Smoking
Names like Aaron Aaron Namesakes Related Names: Hebrew:Aaronas (High Mountain, Derivative of Aaron, Exalted One), Indian: Arun, Aaronraj , Scottish: Arran, Other: Aarron, Ahren (Enlightened), Aaronjames, Aerin (Black, Dark, Of the Adriatic), Aarona, Aaronae (Lily, Form of Susan, Heart as Big as Ocean), Aaronda, Aaronette, Aaroni (Finnish variant form of Aron), Aaronisha (Shadow, The Tingling of the Ear), Aaronjacob, Aaronjohn, Aaronjoseph, Aaronjosh, Aaronjoshua, Aaronlee (Firm Defender, Mountain Strength), Aaronmichael (Rule with Mercy), Aaronn, Aaron James, Aaron-James, Posts having Aaron:
Irish names from the Bible
Finding the Perfect Name: Where Do You Start?
Baby Names inspired by Months and Seasons
Comments :Aaron is a male first name. This masculine name came from the Hebrew word Aharown. The name is in the Old Testament to find. Thus was the older brother and rival of Moses and first high priest Aaron ( Hebrew אַהֲרֹן Aharon). He is considered the founder of the "Aaronic Priesthood" and namesake of the " Aaronic blessing ". The origin of the name is probably Egyptian and means "Sage, mountain man, (large) fighter, hero, High placed, or enlightened. According to another theory, it should be an original Hebrew name ( Hebrew אַהֲלוֹן, Ahǎlôn "Tent Man") act. This is a sound change of the Egyptian l to r have occurred. There might also be a reference to Hebrew ארון, Aron, "(federal) drawer box". The Today in German only rarely awarded first name is also found as a surname. The Islamic variant of the name is Harun. For medieval iconography Aarons see the itemization. An Aaron is depicted often with flowery rod, which makes it easily recognizable in the groups of prophets in the porticoes of the temples . Also often it appears in scenes from the life of Moses. At the end of the Old Age and during the Middle Ages, he appears dressed high priest with a headdress resembling a tiara. In the Middle Ages it was often represented him in robes of bishop. His attributes are the phylactery he wears on his head, breastplate with twelve stones and the rod from which emerges an outbreak. The latter was preserved in the Ark of the Covenant in the Holy of Holies with Tables of the Law , manna and other relics of the Exodus. - Hermina Hetzel

Popularity of Aaron Updated on: May 29th, 2019
How to choose a name for your baby
Other variants of Aaron :Haroun 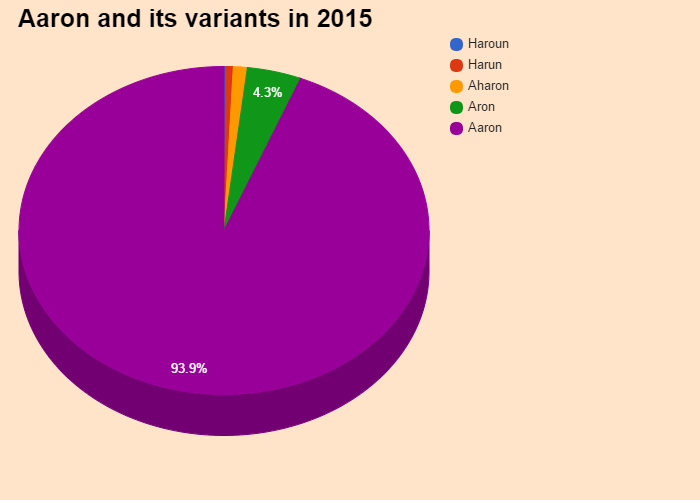 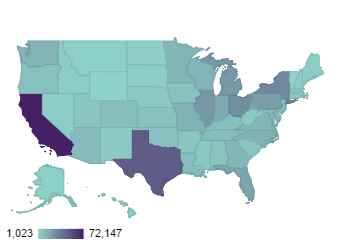