Name: Abella No. of characters: 6 Gender: Girl Origin of Abella: Unknown
How to pronounce Abella a-be-lla What does my name mean? Meaning of Abella: Fragility, Vanishing

Abella was ranked 867 in 2018 US female names list and elevated by 2.80% from its previous ranking of 892 in 2017. Feminine form of Abel. Comes from the Hebrew "Hevel" Means "fragility evanescence" If party August 5. Abella are full of tricks beings who love having an audience. Chatty, fun,Abellaalso have business sense and are good at business. These are simple beings, adherents of common sense, workers,Abellado much to deserve their happiness. Family life has an important place in their lives.

Other names similar to Abella, for would be parents: Girl name Abeba used principally in Ethiopian meaning "Flower" with same Abe- prefix. Claramilla dominantly used in Danish language given to baby girls. Claramilla is a compound of CLARA MILLA and. Loved in Denmark. Gender insensitive name Harleen that is rare. Its origin is in Old English. Lella means Mistress or Lady and a baby girl name. It is rooted from Arabic while Baby girl name Amiyah and came from Sanskrit. Amiyah is form of Amiya. On baby girl chart, a well-known Amiyah was spotted at 363rd position in 2011.

Expression number of Abella is 6.

Abella have a great affection towards creativity, beauty and domestic activities of life. Abella are trustworthy, honest and behave responsibly. Abella have tendency to sacrifice their needs for others'.

Abella is the latest addition to girl names first appeared in 2000 when 6 babies had Abella as their first name, the baby name went as low as 5 in 2001. At peak in 2012, Abella was given to 84 (0.004%) girls after continuous rising. Abella had a 17 years long run and an instance of disappearance. 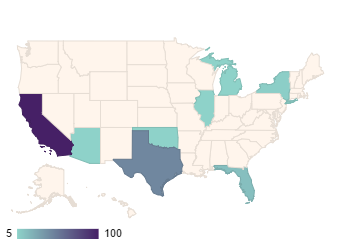