Name: Abia No. of characters: 4 Gender: Unisex Origin of Abia: Biblical Latin Biblical Greek
Religion: Muslim How to pronounce Abia a-bia What does my name mean? Meaning of Abia: My father is Yahweh

Abia is an Arabic name meaning "great." However, one more theory suggests that the name came from Greek name, Aviyah, a form of Biblical Hebrew name Abijah and means "My father is Yahweh." Moreover Abia was the governess of Hyllus, son of Heracles in Greek mythology who was honored by the scion of Heracles by renaming a town after her name. The first name has many variant, some which are older like Aviya, Abiya that can be found in 17th century handwritten documents while recent one include Ava. The first name can be found in Nordic and Russian countries.

Looking for names similar to Abia? Please go through the following names: Unfamiliar name Nayelis bestowed upon girls. Abeneah is form of Abeni. It is rooted from African-Yoruba used for baby girls with similar prefix Ab- while The gender-neutral name Dominik that means "Lord or Belonging to the Lord" and rooted from Latin which is also the name of Author Dominik. On baby boy chart, dominant Dominik elevated to 578th position in 2002. Abilena is derived from Abilene which is rooted from Hebrew and a baby girl name. The unisex name Talia has its origin in Hebrew, Latin and Old Greek that means "Blossom or Born on Christmas". Famous in Finland, United States and Norway. It is celebrated on July 27th.

Expression number of Abia is 4.

Organizing and managing qualities are possessed by Abia. By systematic and methodical approach Abia turns their dream into reality. Abia are extremely sincere and honest.

Abia is the latest addition to girl names remained continuously rare, the baby name went as low as 5 in 2015 after first appearing in 2001 when 7 babies had Abia as their first name. At peak in 2011, Abia was given to 14 girls after a sudden jump. Abia had a 16 years long run and 4 instances of disappearance.

Updated on: May 29th, 2019
How to choose a name for your baby
Other variants of Abia :Abiah 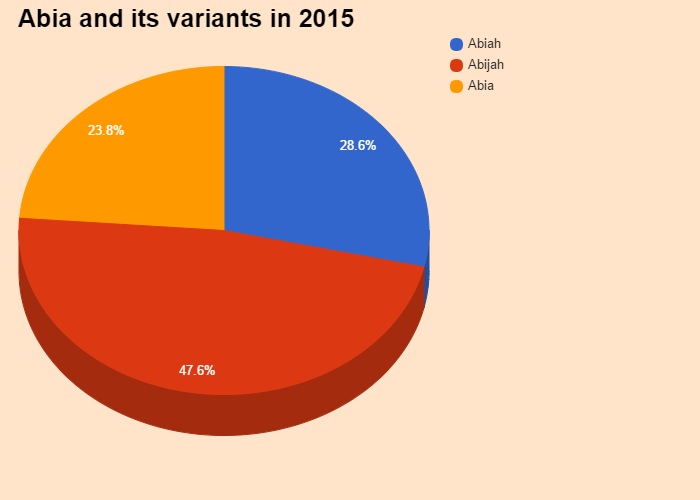