Name: Abigael No. of characters: 7 Gender: Girl Origin of Abigael: Unknown
How to pronounce Abigael a-bi-gael What does my name mean? Meaning of Abigael: God is My Joy

Abigael is spelling variant of Hebrew name Abigail. Abigail came from Biblical name Avigayil or אֲבִיגָיִל in Hebrew comprising of two elements av/ אָב and gil/גִּיל meaning father and joy/ to rejoice respectively and interpreted as "my father is joy or Father rejoiced." In the Hebrew Bible, two women are mentioned who are called Abigail. First one was the sister of David appeared in 1 Chronicles 2, 15th verse. She was the mother of Amasa and second one was the wife Nabal. While Nabal is described as "churlish, mean and ill natured" his wife on the other hand was the beautiful, intelligent and loyal. After the death of Nabal, David asked her for marriage and she became the third wife of Kind David and mother of his second child, Chileab.

Abigael was ranked 849 and came to ranking only once in list of US male names in 2004. Abigael was ranked 903 in 2018 US female names list and elevated by 1.95% from its previous ranking of 921 in 2017. Hebrew birth name, Means "God is my joy" If Day 29 December.. Independent temperament,Abigaelare energetic women. Very imaginative, creative,Abigaeladapt easily to new situations. Abigael love adventure, the unexpected, it has to move. Their lack of patience is their weak point. Generous, welcoming, besides disservice.

Abigael is a rare first name for a girl in England & Wales which is not even used by anyone since 2013. Only 203 people have Abigael as their first name. Abigael is a very consistent name over the past 18 years.

Go through the following names for names similar to Abigael: Baby girl name Engracia. Its origin is in Latin is anomalous name while Lemuel means Devotee or Devoted to the Lord, originated from Hebrew used for boys is also the name of Boxer Lemuel. In 1903, eminent name Lemuel reached 401st position on baby boy names chart. The gender insensitive name Nathanael, rooted from Hebrew that means "Gift of God or God has Given" with similar suffix -ael. The name is quite Well-Known in Iceland and Sweden. The baby boy name Abieda, came from Hebrew. Abieda is variant of Abida. Boy name Qaavigarsuaq, Qaavigarsuaq is Greenlandic form of Kâvigarssuaĸ used in Greenlandic.

Expression number of Abigael is 1.

Abigael loves adventure and independence and possess determination and originality. Abigael generally leads and direct others and likes to establishes their individual identity. 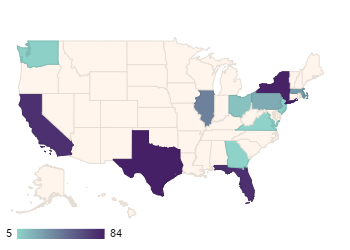