The name Abigail is traditionally known as an English name but originates from the Hebrew name Avigayil which has a meaning of Father's joy. The name Abigail can be seen in the Old Testament, Abigail being the name of King David's third wife. It was after the Protestant Reformation where the name Abigail started becoming popular, especially amongst the Puritans. In the Bible, Abigail is known to refer to herself as a servant and so at the start of the 17th century, the name began to be used as slang, for servant. It was after this that the name started to fade away, but it has seen a resurgence since the 20th century.

Abigail was ranked 905 in 2018 boys names list in US and remain unchanged from its previous ranking in 2017. Abigail was ranked 11 in 2018 list of US girls name and dropped by 10.00% from its previous ranking of 10 in 2017. Name of Hebrew origin, Means "God is my joy" If Day 29 December.. Independent temperament,Abigailare energetic women. Very imaginative, creative,Abigailadapt easily to new situations. Abigail love adventure, the unexpected, it has to move. Their lack of patience is their weak point. Generous, welcoming, besides disservice.

Expression number of Abigail is 5.

Abigail love adventure, excitement and freedom. Abigail are clever, quick-witted and unusually adaptable. Abigail are capable of doing anything they wish for.

Names that rhyme with Abigail Abagail, Abaigail, Abbagail, Abbegail, Abbeygail, Abbiegail, Abbigail, Abbygail, Abegail, Abgail, Abiegail, Abilgail, Abrigail, Abygail, Agigail, Annagail, Avagail, Avigail, GailFamous people named Abigail
Abigail Kubeka in Knock-Out as Actress
Abigail Arundel in Child Hunt as Actress
Abigail McConnell in Truth in Shadows as Actress
Abigaile Johnson in My Private Tutor as Actress
Abigail Joven in Manolis as Actress
Abigail Hart in Episode dated 4 March 2004 as Actress
Abigail Haley in Moments of Clarity as Actress
Abigail Murphy in Kendra Wilkinson as Actress
Abigail Olegski in The Diary as Actress
Abigail Johnson in City of Parks as Sound Department
Abigail Johnston Abigail "Abby" Louise Johnston is an American diver.
Abigail Adams is notable for her acting in movie Colorado Serenade
Names like Abigail Abigail Namesakes Related Names: Arabic: Abire, Irish: Gobnait , Hebrew:Abigale, Abigayle, Abigil, Abilean, Abileane, Abileen, Abileene, Abilena, Abilyna, Abilyne, Abimeleck (A deriative of Abimelech, My Father Is King), African: Abionah, Other: Abagael, Abigaila (Variant form of Abigail), Abigaile, Abigailgrace, Abigaill , Abigaille, Abigailmarie (Shadow, The Tingling of the Ear), Abigajil (Creative spelling of Abigael), Abigajl (Creative spelling of Abigael), Abigal (Shadow, The Tingling of the Ear), Abigayil, Abigayl (Shadow, The Tingling of the Ear), Abigaíl, Abileana, Abimelek (Another form of Abimelech, My Father Is King), Abinah (Another form of Abena, Born On Tuesday), Abioniah, Posts having Abigail:
Irish names from the Bible
Cute Names for Little Sister
Finding the Perfect Name: Where Do You Start?
Israel's Top Baby Names
Popular baby names in America
Comments :Abigail is a female first name Hebrew origin. Abigail is a unisex name. In the Tanakh , the Hebrew Bible, the name אֲבִיגַיִל, (comes 'abīgayil , Abigail) for two different women before: for a daughter of Jesse ( 1 Chr 2.16 to 17 EU ) and sister of David and for the wife of Nabal , the one later Women David is ( 1 Sam 25 EU ). In the Jewish tradition, the widow of Nabal deemed prophetess. In addition, the variant אֲבִיגַל (exists 'abīgal , Abigail) as the name of the daughter of Nahas and mother of Amasa ( 2 Sam 17,25 EU ). The name is composed of אָב 'AV ' father 'and the root גיל gjl "rejoice, rejoice". Abigail can thus be translated as "my father shout" or "my father is joy". But it is interpreted sometimes as "principal of the dance" and "Vortänzerin". In Germany, the name comes before the 16th century, but only sporadically. In the US and in Australia, however, the name is very popular. For example, he was in Australia in 2004 at No. 3 of the most awarded female names, 2005 in the USA 4th place. Variants of the name: Abigail, diminutive: Abbie, Abby (variants: Abagael, Abagail, Abagale, Abageal, Abagil, Abaigael. - Kum Kivi

Popularity of Abigail Updated on: June 24th, 2019
How to choose a name for your baby
Other variants of Abigail :Abigaia 'Avigayil Apikalia 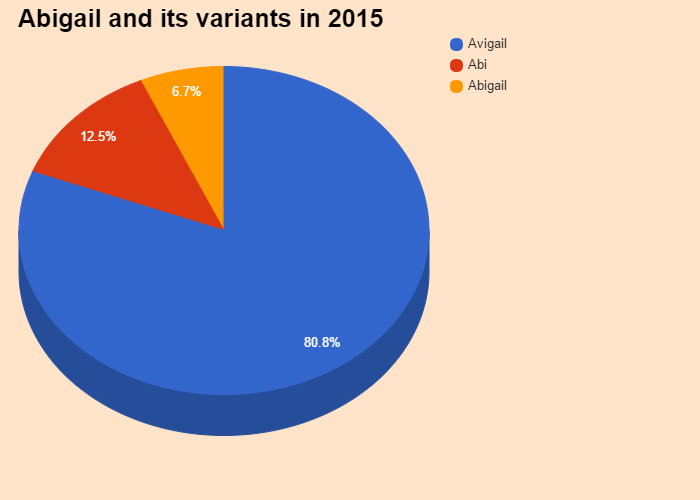 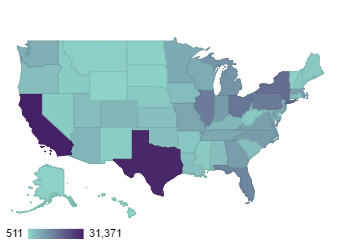