Name: Abigal No. of characters: 6 Gender: Girl Origin of Abigal: Unknown
How to pronounce Abigal a-bi-gal, ab-ig-al , What does my name mean? Meaning of Abigal: Shadow, The Tingling of the Ear

Abigal is spelling variant of classic and prominent Hebrew name Abigail. Abigail came from Biblical name Avigayil or אֲבִיגָיִל in Hebrew comprising of two elements av/ אָב and gil/גִּיל meaning father and joy/ to rejoice respectively and interpreted as "my father is joy or Father rejoiced." In the Hebrew Bible, two women are mentioned who are called Abigail. First one was the sister of David appeared in 1 Chronicles 2, 15th verse. She was the mother of Amasa and second one was the wife Nabal. While Nabal is described as "churlish, mean and ill natured" his wife on the other hand was the beautiful, intelligent and loyal. After the death of Nabal, David asked her for marriage and she became the third wife of Kind David and mother of his second child, Chileab.

Expression number of Abigal is 5.

Abigal love adventure, excitement and freedom. Abigal are clever, quick-witted and unusually adaptable. Abigal are capable of doing anything they wish for.

The girl name first appeared in 1970 when 5 babies had Abigal as their first name, the baby name went as low as 5 in 1981. At peak, Abigal was given to 38 girls in 2005 after continuous rising. After it's 47 long run and having 4 instances of disappearance, Abigal seems to be bidding a farewell. 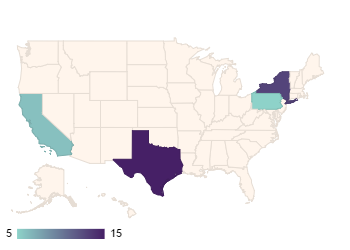