Name: Aloysius No. of characters: 8 Gender: Boy Origin of Aloysius: Old French
Religion: Hindu How to pronounce Aloysius a-lo-ysius What does my name mean? Meaning of Aloysius: Renowned Warrior, Fame and War, A Form of Louis, Famous Warrior, Very, Most, All and Wise

Baby name Aloysius is originated as a Latinisation of the names Louis, Lewis, Luis, Luigi, Ludwig, and other cognate names and derived from Frankish Hlūdawīg which is composed of elements hlūdaz meaning "to hear, loud, sound, famous" and wīg meaning "fight, battle, fighter, able to fight", hence the meaning of the name is "glorious in battle, famous warrior". The early bearer of the name is Aloysius Gonzaga who was a 16th-century Italian saint. A notable bearer of the name is James Augustine Aloysius Joyce who was an Irish novelist and regarded as one of the most influential and important authors of the 20th century. Another famous bearer is Aloysius Pieris who was a Sri Lankan Sinhala Jesuit priest.

Aloysius is an extremely rare boy name used only once in 2014 over a span of a decade which is a rare name since 2014 and ranked 4632 in 2014. Only 3 people have Aloysius as their first name. Aloysius is not a native England and Wales name and Aloysius may be a short form of some other name or came from some other language .

Aloysius is a rare first name for a boy in United States which is a rare name since 1880 and ranked 913 (0.000454% bearer) in 2015 in US. Only 5530 people have Aloysius as their first name. Aloysius is not a native United States and Aloysius may be came from another language or is a short form of some other name. 0.001547% of people in US have this given name.

Expression number of Aloysius is 4.

Organizing and managing qualities are possessed by Aloysius. By systematic and methodical approach Aloysius turns their dream into reality. Aloysius are extremely sincere and honest.

Names that rhyme with Aloysius Aloisius, Aloysius, Ambrosius, Athanasius, Casius, Cassius, Dionisius, Dionysius, Dyonisius, Gervasius, Kassius, TheodosiusFamous people named Aloysius
Aloysius Anagonye, Nigerian professional basketball player
Aloysius Anagonye, professional basketball player, descendant of Nigerians
Names like Aloysius Aloysius Namesakes Related Names: Arabic: Alomar (Covered with Gold, Variation of Alamar, Gilded), Hebrew:Alonn, Alouf (A deriative of Aluf, Friendly), Alouph (Friendly, A deriative of Aluf), German: Louis, Alonsa, French: Aloisia, Other: Aloysuis (Noble, Famous), Alok, Aloke (Light), Alokpal (Preserver of Light), Alolupan (One of the kauravas), Alop (That which does Not Disappear), Aloess, Aloj, Alomarr (Gilded, Variation of Alamar, Covered with Gold) Comments : Aloysius is a male first name. It is mainly used in Germany in southern area. The name not most of the time but sometime has explained as Alwis, "very wisely", this derivation, however, is "unproven". In fact, it is a variant of Aloysius, a latinized version of a Provencal version of Ludwig (ibid). Versions of the name are Alois, Aloys, Aloisius, Alojzy, Aloisio. - Peggy Lisowski

The classic boy name first appeared in 1880 when 12 babies had Aloysius as their first name, the baby name went as low as 7 in 2003. At peak, Aloysius was given to 199 (0.010%) boys in 1916 specifically in Pennsylvania where 47 babies were named Aloysius after continuous rising. After it's 137 years long run, Aloysius is currently rising in the chart.

Updated on: August 2nd, 2019
How to choose a name for your baby
Other variants of Aloysius :Chlodovech Clodovicus Ludovicus Clovis Hludowig Koldobika 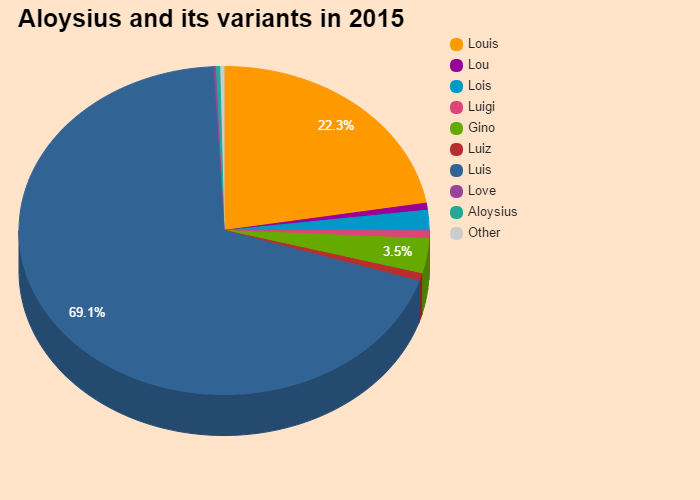 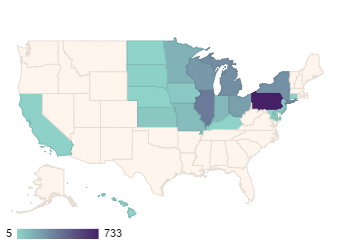