Name: Annabell No. of characters: 8 Gender: Girl Origin of Annabell: German
How to pronounce Annabell a-nna-be-ll What does my name mean? Meaning of Annabell: Noble, Female Version of Albert from the Old German, Bright, Noble Famous

Annabell is a rare first name for a girl in England & Wales which is a rare name since 1996 and ranked 1234 in 2014. Only 317 people have Annabell as their first name. Annabell is a very consistent name over the past 18 years.

Annabell is a rare first name for a girl in United States which is a rare name since 1882 and ranked 810 (0.004013% bearer) in 2015 in US. Only 6247 people have Annabell as their first name. Annabell is not a native United States and Annabell may be came from another language or is a short form of some other name. 0.001747% of people in US have this given name.

Expression number of Annabell is 7.

Annabell likes to research and reason to know the answers of hidden questions as Annabell are gifted with an analytical mind. Annabell are always on the quest for knowledge and wisdom and loves being alone.

The classic girl name first appeared in 1882 when 6 babies had Annabell as their first name, the baby name went as low as 5 in 1892. At peak, Annabell was given to 288 (0.015%) girls in 2014 specifically in Texas where 33 babies were named Annabell after continuous rising. After it's 135 long run and having 2 instances of disappearance, Annabell is on a fall in the chart. 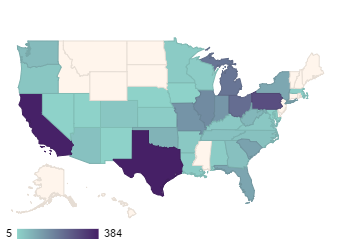