Name: Annabeth No. of characters: 8 Gender: Girl Origin of Annabeth: English (Rare)
How to pronounce Annabeth an-na-bet(h), ann-abe-th , What does my name mean? Meaning of Annabeth: God is Gracious, God has Shown Favour, God is My Oath, Variant of Anne

Annabeth is a rare first name for a girl in United States which is a rare name since 1919 and ranked 770 (0.005023% bearer) in 2015 in US. Only 1534 people have Annabeth as their first name. Annabeth is not a native United States and Annabeth may be came from another language or is a short form of some other name. 0.000429% of people in US have this given name.

Expression number of Annabeth is 11.

Annabeth have high energy levels, just like a child. Annabeth are highly sensitive and possess a high sense of awareness. Annabeth are gifted with a sixth-sense, in addition to discerning and inspiring qualities.

The classic girl name first appeared in 1919 when 7 babies had Annabeth as their first name, the baby name went as low as 5 in 1932. At peak, Annabeth was given to 209 (0.011%) girls in 2014 specifically in Texas where 29 babies were named Annabeth after continuous rising. After it's 98 long run and having 12 instances of disappearance, Annabeth is on a fall in the chart. 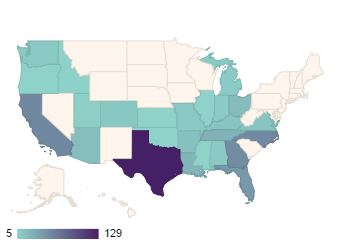