Baby name Emma is a feminine given name which is originated from Germanic word ermen meaning 'whole, universal'. Originally it was used as short form of all the names that contains element ermen or irmen. The name was born by Emma of Normandy, who was the wife both of King Ethelred II and mother of Edward the Confessor. Later on she was married to King Canute. In 11th century this name was borne by an Austrian saint, who was also called as Hemma. In 18th century the name was bring back by Matthew Prior's poem Henry and Emma (1709). The name was also used by Jane Austen in her novel 'Emma' (1816) for the central character, the matchmaker Emma Woodhouse.

One of the most universal short names you will find to be chosen across the globe, Emma represents the bond of its own kind. Popular because of Emma Watson, and other significant women, Emma also represents a power of a woman, as well as the femininity. Have you ever wondered why it is popular across the globe? Well, probably due to the fact that it means “universal”, and even though many aren’t sure of a meaning when they decide on it, what matters is that it connects various people for a single reason, a set of the meaning and letters.

Emma was ranked 921 in 2015 list of US boys name and dropped by 0.77% from its previous ranking of 914 in 2014. Emma was ranked 1 in 2015 girls names list in US and remain unchanged from its previous ranking in 2014. Comes from the Hebrew "immanouel" It means, "God with us" If party April 19.. Emma have a sense of justice and morality. Intransigent,Emmado not know half measures. Their apparent severity was quickly tempered by their generosity and their natural tenderness. Active, voluntary, generous,Emmagive lavishly. Sincerity is always in effect.

Emma is a very very popular first name for a girl in England & Wales which is popular since 1996 and ranked 57 in 2014. Around 42009 people wear Emma as their first name. Emma is a very consistent name over the past 18 years.

Do you like Emma? Other names you would love: Fresh Emmalei has its origin in English-American, Emmalei is a form of Emmalee given to girls. Origin of Emmalyn is in Germanic and English, a girl name. It means "Lyn or Emma". The name is quite a bit Frequently Used in norway, usa and denmark. Outstanding Emmalyn ranked at 525 position in 2016 on the list of baby Girl names while Girl name Alekzandra is uncommon name. Toma is variation of Thom, a unisex name which originated from Aramaic with similar -ma ending which happens to be the name of Soccer player Toma. Used largely in Arabic, Ammaarah that means "Lady of Dignity" is a girl name.

Expression number of Emma is 5.

Emma love adventure, excitement and freedom. Emma are clever, quick-witted and unusually adaptable. Emma are capable of doing anything they wish for.

Names that rhyme with Emma Adamma, Amma, Bamma, Bemma, Bumma, Ceomma, Chidimma, Clemma, Cumma, Eamma, Ermma, Fiamma, Gemma, Gimma, Gymma, Hemma, Imma, Jemma, JimmaFamous people named Emma
Emma Knievel in The Last of the Gladiators as
Emma Hendry in It Couldn't Happen Here as Actress
Emma Ibbitson in Stalled as Producer
Gemma Sutton in Care Less as Actress
Emma Red in All Alone as Actress
Emma Hernan in Street as Actress
Emma Colohan in Sunflower as Actress
Emma Rogers in Advent as Actress
Emma Messenger in Nude Nuns with Big Guns as Actress
Emma Molin in Sverige as Actress
Emma Byrne Emma Anne Byrne is an Irish footballer who plays as a goalkeeper in the LSL Arsenal of the WSL and the Irish team, with which she has played more than 90 matches.
Emma Thompson acted in movie Sense and Sensibility
Names like Emma Emma Namesakes Related Names: Emm, Emmabella, Emmabelle, Emmaclaire, Emmadell, Emmagene, Emmagrace, Emmah, Emmajane, Emmajean, Emmajo, Emmakate, Emmakay, Emmalani, Emmalea, Emmaleah, Emmalee, Emmalei, Emmaleigh Posts having Emma:
Ultra-feminine Girl Names
Cute Names for Little Sister
The A to Z of 2016s Top Girls Names
10 Alternatives to 10 Classics
2016's Big Risers
Comments :Emma is a female first name of Hebrew origin "immanu-el" Emmanuelle hence its nickname Emma. Initially, it was the German name meaning "whole" or "universal." In Hebrew, According to the second version, name of Emma founded the Jewish male name Emmanuel means "God with us." It is believed that Emma - a short form of the name Emmanuel. If we take into account its Germanic origin, Emma then means "house". A third version, the name Emma has Latin roots, means "precious", "emotional". The next version is of Arabic origin named Emma. In Arabic language means "faithful", "calm", "reliable". One of the earliest bearers of this name was Emma of Normandy , wife of King Ethelred II. It bore the name of the saint of the eleventh century. After the invasion of the Normans the name spread to England. Emma is a separate name, but can also be a short form of names beginning with ERM or IRM. St. Emma is celebrated on April 19th. In recent years, the 19th and the first of the 20th century Emma was one of the ten most awarded female names in Germany. The popularity of the name was in the following years more and more back. Since the mid-nineties then a sharp rise in its popularity was recorded. Since the late 2000s, the name will return to the "Top 10" of the frequency statistics. Was introduced in England by Emma of Normandy , it became common after the Norman conquest; was revived in the eighteenth century , perhaps in part thanks to the poem by Matthew Prior Henry and Emma. Emma is one of the most popular names given to girls born in the United States , ranking second in both the years between 2003 and 2006 in 2009. In recent years, it is among the most popular names chosen for the new born also in Italy, always returning to the top ten of its istat ranking. Currently the name is common in the US, UK, Ireland, France, Sweden, Belgium, Canada, Armenia, Australia, Norway, New Zealand, Hungary, Finland, Denmark, Germany, the Netherlands, Spain, Poland, Russia. Variants: Emmina, Ema, Emmi, EmJa, Emmy, Immine, Imma, Imina, Hema, Hemma; Russian: Эмма - Naida Nickles 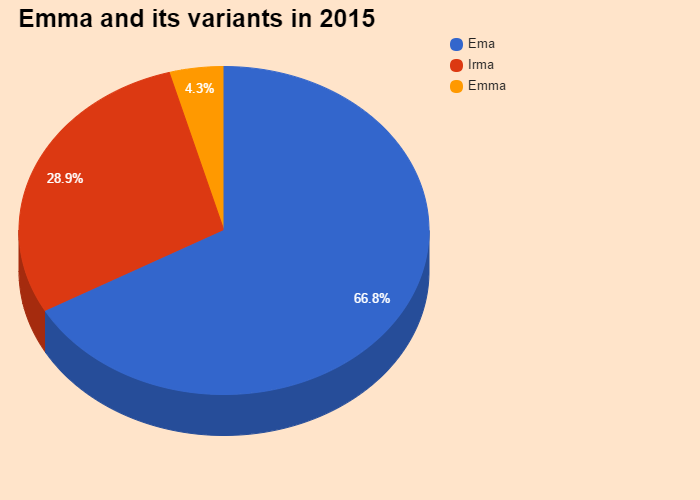 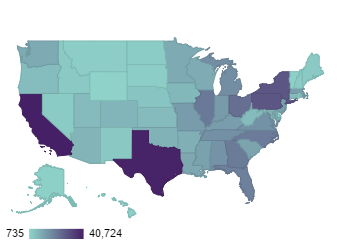