Name: Hava No. of characters: 4 Gender: Girl Origin of Hava: Hebrew
How to pronounce Hava ha-va, hav-a , What does my name mean? Meaning of Hava: Variant of Eve, Fair One, White and Smooth, Soft

The name Hava is a female given name of Hebrew origin and derived from the Hebrew name ḥawwah which in turn is derived from the Hebrew word chavvâh which is derived as the Hebrew form of Eve meaning "to breathe or live, living". According to the myth of Abrahamic religions, this was the name of the first woman created by God. Eve Jihan Jeffers Cooper is the name of an American rapper and actress from Philadelphia. Monsoon HAVA is also the name of a video streaming device. Hava Nagila is an Israeli folk song name which was traditionally sung at Jewish celebrations.

Expression number of Hava is 5.

Hava love adventure, excitement and freedom. Hava are clever, quick-witted and unusually adaptable. Hava are capable of doing anything they wish for.

The girl name remained continuously rare, the baby name went as low as 5 in 1976 after first appearing in 1973 when 5 babies had Hava as their first name. At peak in 2014, Hava was given to 13 girls after continuous rising. Hava had a 44 years long run and 7 instances of disappearance.

Updated on: January 3rd, 2020
How to choose a name for your baby
Other variants of Hava :Hawa 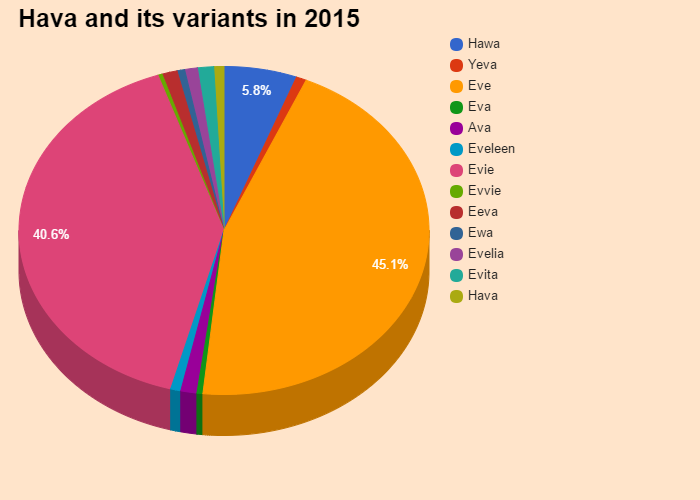