Name: Zahara No. of characters: 6 Gender: Girl Origin of Zahara: Arabic
Religion: Muslim How to pronounce Zahara za-ha-ra What does my name mean? Meaning of Zahara: Yew Tree Estate, From the Farm of Yew Trees, From York, Flow

Baby name Zahara is a female given name of Arabic and Hebrew origin meaning "flowering, shining". A famous bearer of the name is Zahara Schatz who was an Israeli artist and daughter of Boris Schatz who was the founder the Bezalel Academy of Art and Design in Jerusalem. This is also the stage name of Bulelwa Mkutukana who is a South African singer-songwriter. She is known for winning eight awards including 'Best Female Artist' and 'Album of the Year' awards. Another notable bearer of the name is Zahara Rubin who is an Israeli sculptor, painter and artist. Zahara Milton is also a character name in the movie 'Cover'.

Zahara is a rare first name for a girl in England & Wales which is a rare name since 1999 and ranked 1702 in 2014. Only 248 people have Zahara as their first name. Zahara is a very consistent name over the past 18 years.

Expression number of Zahara is 1.

Zahara loves adventure and independence and possess determination and originality. Zahara generally leads and direct others and likes to establishes their individual identity.

The girl name first appeared in 1986 when 5 babies had Zahara as their first name, the baby name went as low as 5 in 1992. At peak, Zahara was given to 173 (0.009%) girls in 2006 specifically in California where 25 babies were named Zahara after continuous rising. After it's 31 years long run, Zahara is currently rising in the chart. 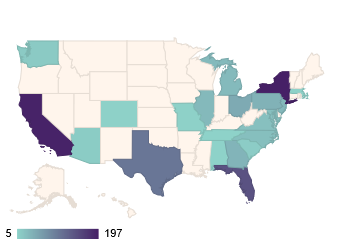