Name: Aditea No. of characters: 6 Gender: Girl Origin: SanskritUsed in: How to pronounce Aditea a-di-tea What does my name mean?

The baby girl name Aditea has it"s roots in Sanskrit language and are mostly Hindu. Meaning of Aditea is Derivative of Aditi, Boundless, Entire, Indian name, meaning: the Boundless. Aditi is the Hindu mother of sky gods., Mother of God, The Earth.

Other names liked by soon-to-be-parents that are similar to Aditea: Shaktea is originated from Sanskrit and a boy name. Shaktea is a form of Shakti. Especially used in Sanskrit and Oriya New-fangled, Aditri. It means "Highest Honor or Goddess Lakshmi", a girl name with similar Adi- beginning. In India, the name is quite a bit well-liked. Originated from Latin, Fidelitea given to baby girls. Fidelitea is a variant of Fidelia. Ikechi is rare name is a boy name while Tiffanie came from Old Greek language. It means "God's Appearance, Manifestation of God or Manifestation of Divinity" given to baby girls celebrated on January 6. Famed name Tiffanie elevated to 500th position in baby girl names list in 1981. 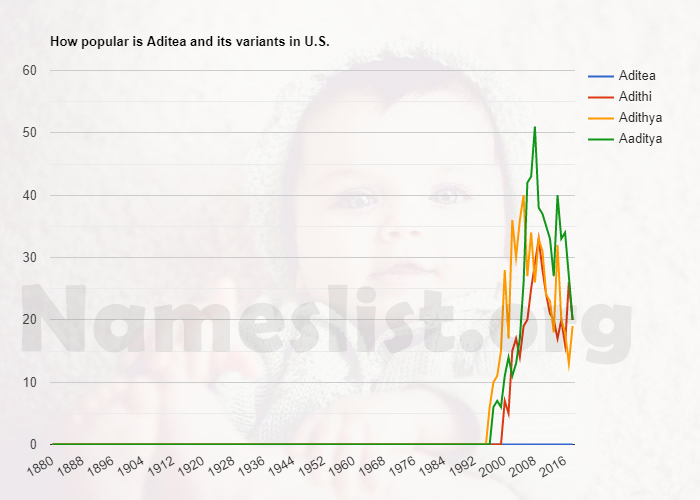