Name: Diarmaid No. of characters: 8 Gender: Boy Origin: Old IrishUsed in: Irish, Irish Mythology Used in countries: UK How to pronounce Diarmaid dia-rmaid What does my name mean?

The baby boy name Diarmaid has Old Irish roots used in Irish, Irish Mythology UK have most bearers. Meaning of Diarmaid is Without Envy, Freem.

If you like Diarmaid, you would love these names: Meaning of Diandra is Diana or Alexandra aimed at baby girls has its roots in Old Greek and Greek which happens to be the name of Finnish singer Diandra. Baby boy name Said that originated from Arabic which means "Happy or Blissful" with similar -aid ending. Larry is diminutive of Laurent has its origin in Latin is a unisex name celebrated on August 10th. In 1944, lofty name Larry managed to bag 844th position among baby girl names while Modern-day moms may find the queer Minie interesting has its origin in Finnish, Spanish and Germanic used for girls. The name is fairly Popular in United States. Baby girl name Hermanna, Hermanna is feminine variation of Herman. Its origin is in Old High German. 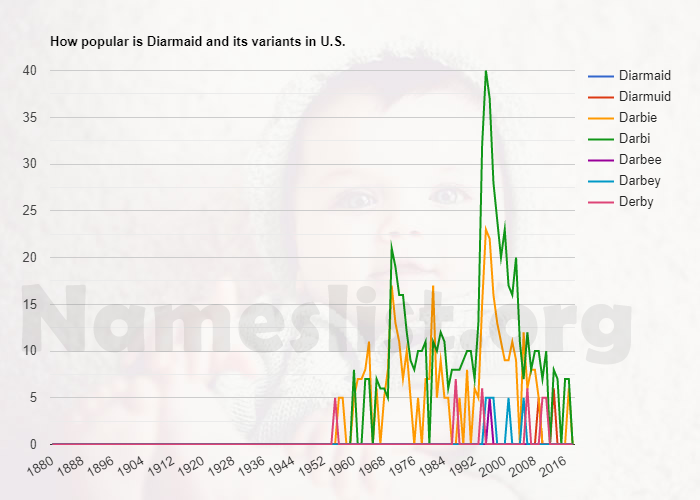